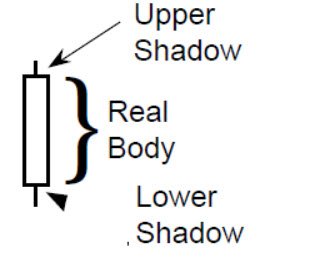 Traditional Japanese charts whose individual lines look like candles, hence their name. The candlestick line is comprised of a real body and shadows. See “Real body” and “shadow.” 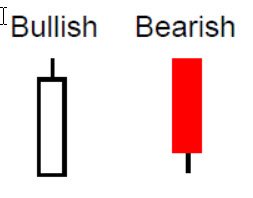 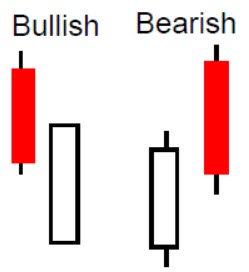 Counterattack lines — following a black (white) candlestick in a downtrend (uptrend), the market gaps sharply lower (higher) on the opening and then closes unchanged from the prior session’s close. A pattern that reflects a stalemate between the bulls and bears. 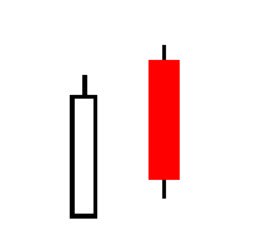 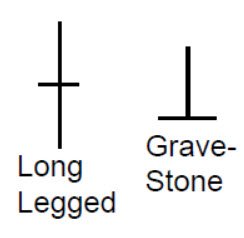 Doji -a session in which the open and close are the same (or almost the same). There are different varieties of doji lines (such as a gravestone or long-legged doji) depending on where the opening and closing are in relation to the entire range. Doji lines are among the most important individual candlestick lines. They are also components of important candlestick patterns. 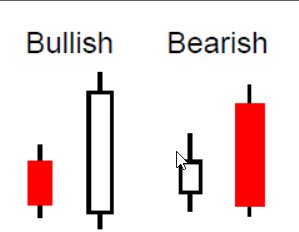 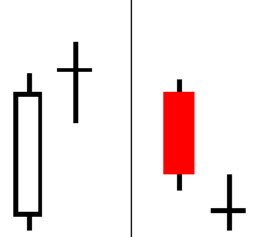 Doji star — a Doji line which gaps from a long white or black candlestick. An important reversal pattern with confirmation during the next session. 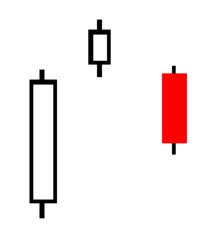 Evening star — a major top reversal pattern formed by three candlesticks. The first is a tall white real body, the second is a small real body (white or black) which gaps higher to form a star, the third is a black candlestick which closes well into the first session’s white real body. 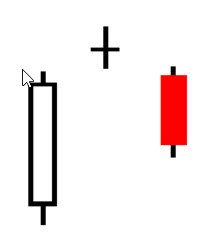 Evening doji star — the same as an evening star except the middle candlestick (i.e., the star portion) is a doji instead of a small real body. Because there is a doji in this patter, it is considered more bearish than the regular evening star.

Hammer — an important bottoming candlestick line. The hammer and the hanging man are both the same line, that is a small real body (white or black) at the top of the session’s range and a very long lower shadow with little or no upper shadow. When this line appears during a downtrend it becomes a bullish hammer. For a classic hammer, the lower shadow should be at least twice the height of the real body.

Hanging man — an important top reversal. The hanging man and the hammer are both the same type of candlestick line (i.e., a small real body (white or black), with little or no upper shadow, at the top of the session’s range and a very long lower shadow). But when this line appears during an uptrend, it becomes a bearish hanging man. It signals the market has
become vulnerable, but there should be bearish confirmation the next session (i.e., a black candlestick session with a lower close or a weaker opening) to signal a top. In principle, the
hanging man’s lower shadow should be two or three times the height of the real body. 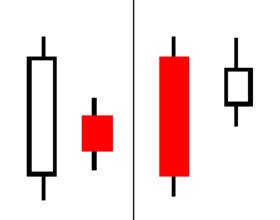 Harami cross — a harami with a Doji on the second session instead of a small real body. An important top (bottom) reversal signal especially after a tall white (black) candlestick line. It is also called a petrifying pattern.

Inverted hammer — following a downtrend, this is a candlestick line that has a long upper shadow and a small real body at the lower end of the session. There should be no, or very little, lower shadow. It has the same shape as the bearish shooting star, but when this line occurs in a downtrend, it is a bullish bottom reversal signal with confirmation the next session (i.e., a white candlestick with a higher close or a higher opening).

Morning star — a major bottom reversal pattern formed by three candlesticks. The first is a long black real body, the second is a small real body (white or black) which gaps lower to form a star, the third is a white candlestick that closes well into the first session’s black real body. 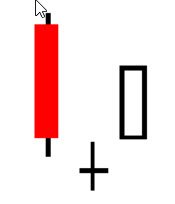 Morning doji star — the same as a morning star except the middle candlestick is a doji instead of a small real body. Because there is a doji in this pattern it is considered more bullish
than the regular morning star. 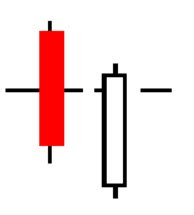 Piercing pattern – a bottom reversal signal. In a downtrend, a long black candlestick is followed by a gap lower during the next session. This session finishes as a strong white Candlestick which closes more than halfway into the prior black candlestick’s real body. Compare to the on-neck line, the in-neck line, and the thrusting line. 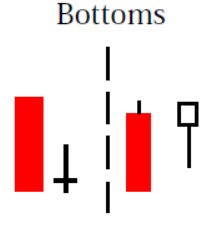 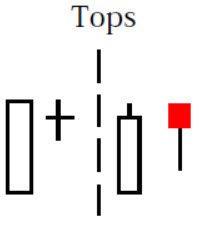 Tweezers top and bottom — when the same highs or lows are tested the next session or within a few sessions. They are minor reversal signals that take on extra importance if the two candlesticks that comprise the tweezers pattern also form another candlestick indicator. For example, if both sessions of a harami cross have the same high it could be an important top reversal since there would be a tweezers top and a bearish harami cross made by the same two candlestick lines.

WinTrader V8.0 Ready to Launch with Scanner in Metatrader 4

How you can make your Stock trading Easier and Profitable?

The Most Common mistakes made by Investors in Stock Trading

What mean by Trailing Stop Loss, how it will help the trader to reduce The risk in Trading MCX, NSE, FOREX Markets?

The main reasons, why most of new faces in day trading are failed?

Do you want to make Profit in both Bull and Bear market? The secret is here, for you.

The key point of Successful Trade is in your finger tips

How can we take trading as a full time job and make our life?

How auto scanning destroys your trading in MCX, NSE, FOREX?

Follow a good trading plan to reduce the risk in Trading

The involvement of Technical Analysis in the world of Trading

Risk and Rewards of FOREX Trading

Prev. Post
All Posts
Next Post
See the Performance Your Self: Register For Your Free Demo Now Get Free Report
We hate spam and never share your details.
×